Essence-based leadership is about having an internal compass that drives your example and fortifies a strong leadership character—for other leaders, employees, the organization, and customers.
Posted: July 22, 2019
Article Author:
Tom Roth, COO, Wilson Learning Worldwide

“Unless we stand for something, we shall fall for anything.” –Peter Marshall, Senate Chaplain, 1947

Leaders today find themselves in a predicament; many are simply too busy to think about what really matters most to them or to take the time to examinewhat they are doing or why they are doing it. With employee engagement studies indicating a widespread mistrust of leadership, a leader with weak or faulty leadership character can be a huge organizational liability. But a leader with strong leadership character can be a tremendous asset.

As mid-level leaders deal with increased complexity and uncertainty, they are less able to “go by the book” to figure things out. Acting as “corporate translators,” they essentially are placed in the middle of executives and first-level managers. They are responsible for translating corporate strategy, change initiatives, and organizational goals—which they were not involved in developing—into action by engaging others in committing their full energy to creating value and success. This dilemma is compounded by the fact that often they are not clear how committed they are themselves.

These leaders need to engage in honest reflection and self-examination about their leadership beliefs and what they want to BE as a leader, given their widened span of control and greater impact within the organization. To effectively perform at mid-level leadership, leaders need to be well grounded on what it means to BE an effective leader.

The Wilson Learning approach to assessing and developing leaders was created to tap both the Essence and Form of leadership. Character-based or Essence leadership refers to what is at the core—those qualities of a leader that are driven from the inside out. Essence is about purpose, values, beliefs, and vision; it is who the leader wants to BE to his or her followers. A leader’s identity and the example he or she wants to set is based on his or her Essence.

Form refers to what a leader needs to DO—behaviors and actions a leader takes to demonstrate leadership competencies. These often are driven by organizational rules and policies. Form comes from the outside in. It is the image or persona the leader creates.

This Essence transition requires a mid-level leader to build strong leadership character as a Purpose- and Value-Centered Leader. Because mid-level leaders have more experience, there is often a greater readiness for reflection and self-examination of their philosophies, beliefs, and values. And that Essence transition starts by understanding where leaders get the signals that guide them.

When we ask managers or leaders, particularly newer ones, what they need to be effective as a leader, they often will start by describing what they think they need to have. They describe the need for power, authority, responsibility, control of the budget, etc. When we ask them what they would doif they had those things, they say they would make decisions, set goals, and guide performance. We then ask if they did those things, what would they be? They usually say they would be successful, promoted, valued, and so forth. Their approach takes the perspective of Have-Do-Be: “I need to have the authority, so I can do more, so I can be successful.” 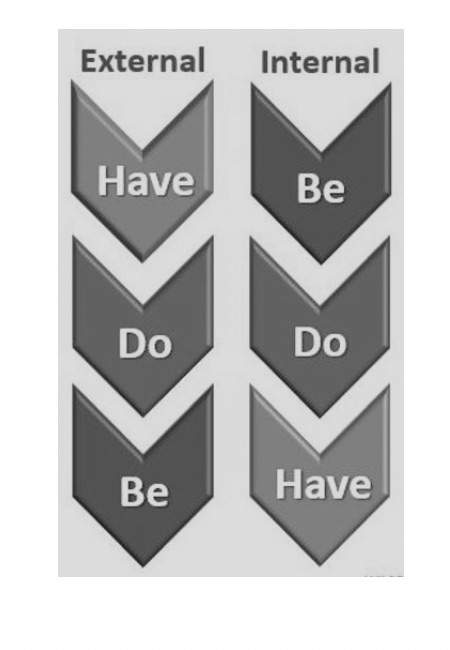 The Have-Do-Be perspective looks for external signals to guide leadership character, with success being measured by appearance, position, and title. Life is lived on “approval.”

However, mid-level leaders who have already developed Purpose- and Value-Centered Leadership flip the approach to Be-Do-Have: “I need to be a Purpose-Centered Leader, which guides what I do as a leader, and only then will I have the sense of how to contribute to the success of others.” The Be-Do-Have perspective looks for internal signals and responds to values to guide leadership, with success being measured by effectiveness and contribution to others, not title or salary. Life is lived on “purpose,” not on the approval of others. When this is the case, leaders often find what they initially thought they needed to have to be successful—such as position, title, power, etc.—wasn’t really so important.

“Leaders lead by example, whether they intend to or not.” —Anonymous

Whether the leader wants to or not, he or she is being watched and is, therefore, always setting an example. Employees look for signals that reveal what the leader stands for and what the leader plans to do. Character-based leadership requires an intentional shift to set an example from the inside out, one that exemplifies what they stand for—their purpose, values, beliefs, and vision. And that takes a large dose of both resiliency and courage.

Over the decades, we’ve asked employees what they want to see from leadership. Many have said trust, integrity, and being the example, in addition to courage. When asked what they meant by courage, employees implied it wasn’t the courage of taking risks but the courage of “being”—of standing for something.

In challenging times, people are looking for some kind of constancy in their life. It is often difficult to find this in their work, with their customers or marketplace, or in the ever-changing business environment.

Leaders can be a source of constancy for other people, but not if they get their leadership signals from external sources that are always subject to change. Leadership actions based on external signals suggest that a leader must win people’s approval to get them to follow. But the reality is that people tend to follow leaders who are true to what they believe in and act consistently on their beliefs, even when their actions may not be popular. These are the resilient, courageous leaders. And that is why focusing on internal signals is so important. Essence-based leadership is about having an internal compass that drives your example and fortifies a strong leadership character—for other leaders, employees, the organization, and customers.

Tom Roth is chief operating officer for Wilson Learning Worldwide. With more than 40 years of experience developing and implementing human performance improvement solutions, Roth is responsible for the strategic direction and business performance of Wilson Learning Worldwide operations. In addition, he leads the global marketing services and R&D solutions group, which is responsible for the research and development of all solutions and position papers. Roth assists global executive leadership teams with issues related to employee engagement, leadership development, strategy alignment, and business transformation. Before assuming his current role, he was president of the global R&D and solution development groups and also served as president of Wilson Learning Americas. For more information, visit: WilsonLearning.comor call 800.328.7937.

We are now accepting session proposals for the Training 2021 Conference & Expo (Feb. 22-24, 2021, Orlando, FL). Click here for more information and to submit your proposal by June 1.

Need help with design or delivery of online training? Or, looking for techniques to engage your learners virtually? Training Live + Online certificate programs are here to help you. Delivered via a series of live webcasts, you’ll learn from an expert while connecting with your peers.  Space is limited for each course so register early!

Save 10% on a June or July certificate program with discount code: tctm

Podcasting for Trainers: Design to Delivery

The Top 125 Awards and Gala Experience

Training magazine’s Training Top 125 Award winners are the organizations with the most successful learning and development programs in the world.

Training Really Matters!
Cheers to 20 Years!
The Choice Was Yours!
The Alligator Trap
Can Smart Tech Be Too Smart?
Putting People First

The Top 125 Awards and Gala Experience

Training magazine’s Training Top 125 Award winners are the organizations with the most successful learning and development programs in the world.