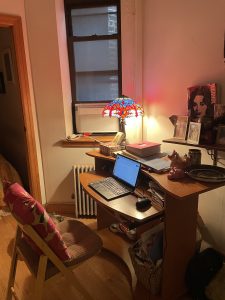 Employees have widely expressed a love of working from home. While that may have been settled, what has not been settled is how ergonomically comfortable they are at their home “workstations.” With many employees now able to work, at least part of the time, from home, the question arises of how much responsibility (if any) a company has to provide comfortable in-home workstations.

I have gotten used to a home workstation that is not optimal. My home “office” consists of a wooden folding chair with a cushion for me to sit on and a Marimekko pillow placed behind my back. I tried buying a lumbar support pillow online, but found it didn’t work with my chair. I would buy a proper office chair, but the space between where I need to sit at my desk and my refrigerator behind me in my small New York City apartment is tight, so a new chair poses challenges. However, if I my employer offered to pay for a new desk chair, I might say, “Yes.” I would be motivated to research a chair that would be ergonomically comfortable, fit in the available space, and pleasant looking enough to be featured prominently in my little apartment.

It turns out many employees are like me and not ergonomically comfortable working from home, according to survey results released by Craftjack. Among the more interesting findings:

You could argue (which I might if I were an employer), that the discomfort is the tradeoff for working from home. That would especially be my argument if the employee voluntarily chose to work from home, rather than come into the office. However, another way to look at it is to question how the company will get the greatest return on its investment. If remote employees have shown they are both more productive and happier, and, therefore, more likely NOT to become part of the Great Resignation, then it makes financial sense to help them create a comfortable home workstation.

Logistically, how would company sponsorship of home offices work? Would it be in lieu of a physical workplace, so that the only way such sponsorship would make sense is if a company could eliminate, or significantly reduce, the office space it has invested in? Or would it mean that employees who opt to have company-sponsored workstations necessarily opt out entirely of an in-office workstation, so they only are welcome in the office for meetings, but not to do day-to-day work?

I read in an article by David Gelles in The New York Times last week that some companies are permanently giving employees the option of working from home, but that they are making them choose one or the other, rather than leaving the office workstation an option that is available to them whenever they like: “…in early October, PwC announced that remote work was a permanent option. Workers had two weeks to decide what they would do. Those who decide to change cities or remain remote may have their assignments changed, but are not at risk of being let go.”

It sounds like, by forcing a decision, the work-from-home arrangement will not be the breezy, how-do-I-feel-today option people like me prefer. When I read that article in The Times, I started to think about what I would do if such a decision were presented to me. I have always said I like the in-office routine of having a place to go every day—and having the comfort of the workstation I used to have when working in an office. The added comfort of a proper desk and chair—and two large computer monitors to plug my laptop into—are key advantages of office life for me. If it were possible to duplicate parts of that setup in my apartment, the decision about whether to permanently say goodbye to in-office work would not be as hard.

Comfortable in-home workstations can be a motivation for employees to stick with your company. Many organizations would give them the option of working from home, but how many would make sure they were comfortable while doing so?

Do you outfit employees’ home workstations to ensure they are comfortable and primed for maximum productivity?

How Do You Measure Diversity, Equity, & Inclusion (DE&I) Success?

What Does It Take to Master the Hybrid Workplace?