“Global literacy” or “knowledge about the world” has never been a strong point among citizens of the United States. It may not improve any time soon if the results of a 2016 Council on Foreign Relations and National Geographic survey are to be believed (and I have no reason to doubt them).

The survey population consisted of 1,203 people ages 18 to 26 who currently attend or recently attended a college or university in the United States, whether a two-year or four-year institution.

The survey “revealed significant gaps between what young people understand about today’s world and what they need to know to successfully navigate and compete in it.” For example, on the knowledge questions asked, the average score was only 55 percent correct. Just 29 percent of respondents earned a minimal pass (66 percent) correct or better. Just over 1 percent (17 of 1,203) earned an A (91 percent or higher).

There is some good news. A majority indicated they believed it important to be knowledgeable about geography, world history, foreign cultures, world events, and other such topics. Seventy-two percent said these topics are becoming more important to them.

Despite the recent election results in the U.S., it is essential that young people who are competing for jobs understand the global context in which they operate and make decisions. One of the challenges in higher education is that the scientific, technological, engineering, and mathematical problems students encounter are decontextualized. Some solutions in these fields are by their very nature abstract and can, of course, be developed without an understanding of the social, cultural, environmental, and political contexts in which they must be applied, but many others cannot. Additionally, the processes by which solutions are developed increasingly involve global—or at least international—collaborations. While “globalization” (by which I mean economic, political, and cultural integration) might be unpopular at the moment, global trade is an ongoing necessity. General cultural intelligence—and specific country knowledge—is still a critical competency for developing and maintaining competitive advantage. It’s estimated that one-fifth of jobs in the U.S. now are tied to international trade.

Since 2012, the U.S. Department of Education has emphasized “global and cultural competency,” but we will have to wait and see what priority it has for the new administration.

Below, I have given you a sample of 10 questions and answers (at the end of the article) from the Council on Foreign Relations and National Geographic study. If you get six or more correct answers, you are doing pretty well or very well. Below six, and you should consider how you can gain more exposure to world affairs, e.g., changing the newspapers you read, subscribing to different magazines/Websites, or watching TV news programs with more of an international flavor. Global news is out there to be found, but in the U.S., you sometimes need to make an extra effort. I feel lucky to have grown up with the BBC TV and radio. Despite living in the United States, I still use BBC Websites for international news coverage.

1. Which of the following is meant by the phrase, “nuclear deterrence”?

2. In which of these countries is a majority of the population Muslim?

3. Which language is spoken by the most people in the world as their primary language?

4. Which branch of government has the Constitutional authority to declare war?

5. Select all that apply: Which countries is the United States bound by treaty to protect if they are attacked?

7. Select all that apply: Which of the following countries have 3,000 or more U.S. troops stationed in them?

8. Select all that apply: Which of these countries have veto power over UN Security Council resolutions due to their status as permanent members of the Security Council?

9. Match each country in the left column with the relevant current issue in the right column.

10. Which country is the largest trading (i.e. import/export) partner of the United States based on total dollar value of goods and services?

If we seriously want to develop global literacy in, for example, our management population, we in the learning and development field must think about how we can integrate the global dimension into our learning solutions. Not just add-on, but purposively integrate across the spectrum of our offerings. 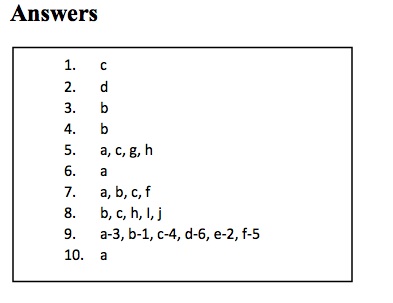 Terence Brake is the director of Learning & Innovation, TMA World (http://www.tmaworld.com/training-solutions/), which provides blended learning solutions for developing talent with borderless working capabilities. Brake specializes in the globalization process and organizational design, cross-cultural management, global leadership, transnational teamwork, and the borderless workplace. He has designed, developed, and delivered training programmes for numerous Fortune 500 clients in the United States, Europe, and Asia. Brake is the author of six books on international management, including “Where in the World Is My Team?” (Wiley, 2009) and e-book “The Borderless Workplace.”