From Individual Contributor to Leader

In tennis, what wins on grass and clay doesn’t always translate to asphalt. When you win Wimbledon, you don’t expect your coach’s first conversation to be, “Congratulations, you won on grass! But now it’s going to take a whole different approach to win on asphalt.” You expect to be showered with accolades; instead you get an ego enema. The world of professional tennis is fraught with experts who were unable to transfer their superior play from one surface to another.

Likewise, I don’t imagine that most high-performing, driven people promoted into leadership realize that they must now fundamentally change their approach. But many of the paradigms that got you promoted won’t make you successful as a leader. You may be aware of Gallup’s bestselling book, “Now, Discover Your Strengths.” A subsequent book, “Discover Your Sales Strengths,” highlighted the conundrum high-producing salespeople face when they are “rewarded” with a promotion to become a sales leader. The strengths they perfected as an individual salesperson often included a strong sense of competition, a need for individual recognition and fame, and sometimes a zero-sum-game mentality—I win; they lose. Great for winning on the sales scoreboard, not so great for nurturing, coaching, and leading your team (as in, those people who might have been your peers yesterday). 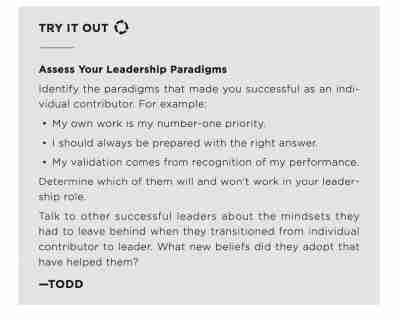 Across most professions, this perilous chasm exists: teacher to principal, server to restaurant manager, physician to chief of medicine. Or as the bestselling book by Marshall Goldsmith states, “What Got You Here Won’t Get You There.” Fundamentally, becoming a leader will require you to let go of some of the skills and mindsets that made you successful as an individual contributor.

In the best of worlds, your manager would sit you down, talk about your strengths and why you were promoted, then explain what you’re going to need to do differently going forward. If you don’t receive that feedback, you have this book. We’ll introduce each of the practices with a key mindset shift leaders must make to accomplish results. Circle which one tends to describe you at this point in time. (Don’t know? Ask your team—they’ll definitely have an opinion.) 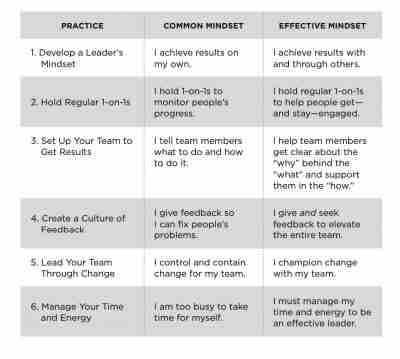 Practice 1 Mindset Shift
I once worked with a record-setting salesperson, Carolyn. When a sales manager position opened up, it was a no-brainer to promote her.

Everybody assumed she would seamlessly transition from hitting—and often exceeding—her number quarter after quarter to helping her new team do the same.

That didn’t happen. Instead, if her salespeople faltered during a client meeting, Carolyn would swoop in and use her extraordinary sales skills to close the deal. She thought she was saving the day. She was, but only that day. Her team didn’t develop their own selling skills because Carolyn wouldn’t let them make mistakes and recover from them. This is a common new manager mistake: relying on your individual contributor skills—and doing everything yourself as soon as there is a problem—rather than helping your team solve the problem and learn. In the process, you lose your new team’s trust. Carolyn was so focused on helping get the sale—what she knew she was good at and could do—that she lost sight of a critical reality: Her new role was no longer about her hitting the number—it was to have her team hit the number. 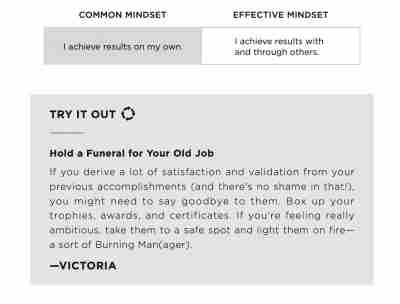 When you become a leader, your definition of results needs to change. You need to see them differently. When you were an individual contributor, your results were the work you did. But now you’re a first-level leader, so you own the results of everybody on your team. Your first job is not to get results alone, but with and through others. You’re still responsible for your personal deliverables, but they take a back seat to ensuring that your direct reports hit theirs, while the people on your team grow, learn, and even become leaders themselves. In other words: Your people are your results.

You might be thinking, “I didn’t even hire these people!” But part of your job is to discern the talent, coachability, and potential of each member of your team, whether you hired or inherited them. You have to learn who can—or can’t—rise to the new standard you’re requiring. But before you consider dismissing an employee, remember that they might just need a leader who can challenge and inspire them to a new level of contribution. That leader might be you.

What if Carolyn didn’t save the day during sales meetings? Yes, her team would make mistakes. Some deals might not close. But her team would learn from those errors, especially if she followed up with feedback and coaching, and they would probably get better results in the future. Just as important, she would show that she trusted her team, rather than treat them like rookies who needed hand-holding. The result would be savvier, more skilled, and confident salespeople who collectively met their numbers (and weren’t reliant on one person to save the day every time).

We recognize that some industries and settings have less or no tolerance for mistakes, due to safety, quality, and accuracy. In this case, leaders should work side by side with their team members for close accountability and modeling, without doing their job for them or suffocating them.

Excerpt from “Everyone Deserves a Great Manager: The 6 Critical Practices For Leading a Team” by Scott Miller, Todd Davis and Victoria Roos-Olsson. For more information, visit: www.EDAGM.com

Scott Miller is a 23-year associate of FranklinCovey Co. and serves as the executive vice president of Thought Leadership. Miller hosts multiple podcasts, including On Leadership with Scott Miller and Great Life, Great Career. Additionally, he is the bestselling author of “Management Mess to Leadership Success: 30 Challenges to Become the Leader You Would Follow” and is a leadership columnist for Inc. magazine and Thrive Global. Miller previously worked for the Disney Development Company and grew up in central Florida.

Todd Davis has been with FranklinCovey for more than two decades and serves as the chief people officer. As the Wall Street Journal bestselling author of “Get Better: 15 Proven Practices to Build Effective Relationships at Work,” Davis has delivered keynote presentations and speeches around the globe, including at the World Business Forum. Davis has been featured in Inc. magazine, Fast Company, and the Harvard Business Review.

Victoria Roos Olsson is a senior leadership consultant for FranklinCovey. She is an expert in leadership development and has trained and coached leaders around the world for more than 20 years. Originally from Sweden, she has led learning and development for large organizations across Europe and the Middle East.

Franklin Covey Co. is a global, public company specializing in organizational performance improvement. It helps organizations and individuals achieve results that require a change in human behavior. The firm’s expertise is in seven areas: leadership, execution, productivity, trust, sales performance, customer loyalty, and education. FranklinCovey clients have included 90 percent of the Fortune 100, more than 75 percent of the Fortune 500, thousands of small and mid-sized businesses, as well as numerous government entities and educational institutions. FranklinCovey has more than 100 direct and partner offices providing professional services in 160-plus countries and territories.