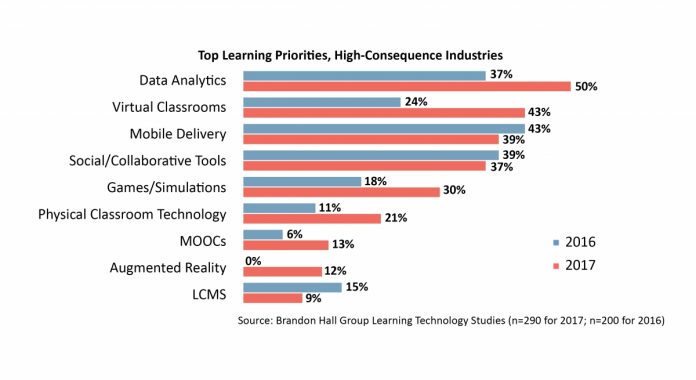 Despite being around for more than 30 years, virtual reality (VR) is just now beginning to catch on in both the commercial and enterprise environments. Advances in computing power and the advent of devices such as the Oculus Rift have brought virtual reality into a practical place in our lives.

From a workplace perspective, virtual reality has vastly expanded the possibility of how we train workers. These platforms make it possible to put employees in almost any locations or situation imaginable, interacting with items that would otherwise be difficult or impossible to have in a training environment.

Virtual reality gives organizations the ability to create scenarios in which employees are actually learning by doing without any consequences. It allows for mistake-driven learning where employees can safely make mistakes and learn along the way. In most enterprise learning environments, experiential learning is often the most difficult to deliver, yet it often has the biggest impact. Virtual reality lets organizations capitalize upon that. Learners can see how they’ll react in stressful situations and identify performance gaps that are standing in their way.

In essence, they can gain valuable online training experience and prepare for every eventuality before they enter the workplace.

Virtual reality is changing the way businesses train their employees through these advantages:

When VR first became popular, it was associated with gaming and other esoteric or recreational uses, and the corporate/industrial world didn’t immediately take it seriously. Most major advancements in technology start out being viewed as toys or fantasies; this was true of the telephone, the internal combustion engine, and probably every other truly revolutionary invention. It’s only when their usefulness becomes widespread, familiar, and undeniable that they are treated as the serious disruptions they really are. Even though it still generates plenty of gaming-related publicity, VR is clearly emerging as a disruptor to pay attention to in almost every business sector.

Trainees can enjoy learning in many different scenarios, simulating different conditions, without moving to a different place. A police officer can train on how to handle robberies, hostage situations, or natural disaster interventions—all in a single place, without moving.

Virtual reality is still an emerging tool for enterprise learning. Not all organizations have a suitable need for the technology. However, Brandon Hall Group’s research has found that interest and use is growing among “high-consequence” industries. These are industries in which organizations face a high level of regulatory and compliance requirements. These include aerospace, chemicals, health care, manufacturing, energy, and investment/finance.

Interest in using game-based technology and simulations has increased significantly among these companies, as more than 30 percent identify these tools as a top learning priority for the next 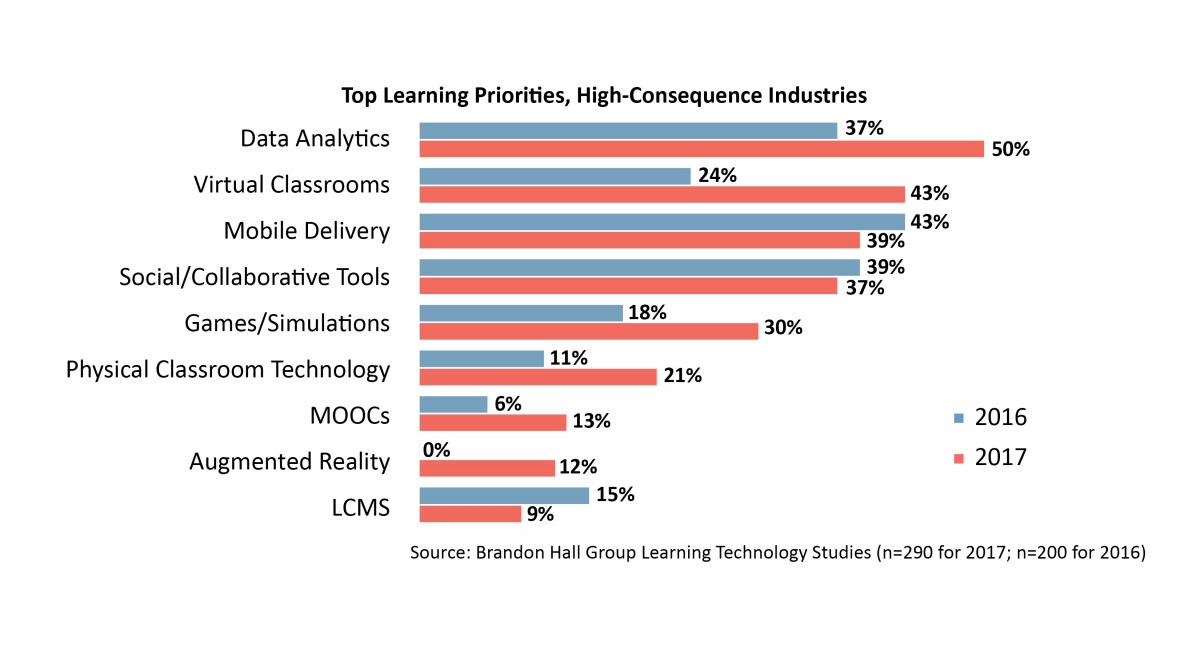 When we look specifically at the use of VR in the context of compliance training, Brandon Hall

Additionally, Brandon Hall Group’s Learning Strategy research found that among high-consequence industries, about 45 percent consider these types of simulations either important or critical to achieving their business goals over the next 18 to 24 months.

However, most are not ready to execute just yet. Only 18 percent of companies in high-consequence industries are ready to take action, according to research, while 29 percent are not at all prepared and 30 percent are only somewhat prepared.

The difference between virtual reality scenarios and traditional simulations is the sense of immersion. The virtual environments also make possible training with hazardous materials or dangerous situations without being in real danger. How else can an airplane pilot train for an engine-failure situation or nuclear plant personnel train for a leak involving nuclear waste?

Learners’ lack of experience might be a risk in some industrial occupations training, for instance, those involving work at height or hazardous material manipulation. VR-based simulations offer a safe environment, where novices are able to train. The safety factor alone can be enough to justify any investment in VR training because the cost of accidents both in training and, eventually, on the job can be astronomical. According to the Bureau of Labor Statistics, there were 722 workplace deaths in 2015 that resulted from contact with objects or equipment. There were also 424 deaths resulting from exposure to harmful substances or environments, an increase of 34 events from 2014.

Training that can better prepare workers for the types of hazardous environments they will encounter can help mitigate this risk.

The value of virtual reality for workplace safety initiatives lies in its ability to overcome classic learning problems, especially at the large scale involved in a manufacturing setting. The most obvious of these problems is the inherent limitation of 2-D-written or video material in preparing workers for real-life situations. Up until now, participating in such training programs involved a worker passively watching a video or reading a printed safety procedure, and then perhaps being asked to answer questions about the material. This lack of realism in traditional teaching procedures shows up as a glaring defect when compared with the immersive experience of VR training. In virtual safety training, the worker directly experiences many of the actual sights and sounds of a real-life emergency and learns to respond appropriately to such a situation regardless of his or her emotional reaction.

As referenced earlier, the majority of what people learn comes from experiential learning, or “learning by doing.” Virtual reality provides an avenue to allow learners to get hands-on without actually executing on the job. Not only does this represent the majority of how we learn, but it also represents a modality with high retention rates.

According to Dr. Narendra Kini, CEO at Miami Children’s Health System, the retention level a year after a VR training session can be as much as 80 percent, compared to 20 percent retention after a week with traditional training. “The level of understanding through VR is great because humans are primarily visual, and VR is a visual format,” Kini says. “We believe there are numerous opportunities where repetitive training and skill set maintenance are critical for outcomes. Since there are not enough patients in many cases to maintain these skill sets, virtual reality is a real addition to the arsenal. Imagine also scenarios where we need to practice for accreditation and or compliance. In these situations, virtual reality is a god-send.”

As industrial and manufacturing positions increasingly fill with younger workers, it’s appropriate to make use of the technology that’s familiar to this generation. Accustomed to extensive and sophisticated gaming platforms, younger workers find it easier to make the transition from virtual reality safety training to real-world practices. According to a recent survey, safety and manufacturing skills training was the second-most popular application of VR and augmented reality among U.S. manufacturers. The ways in which those manufacturers are applying VR and

Not only can simulations be safer and less expensive than real-life exercises, they can be more cost effective than a standard e-learning course.

It would be reasonable for such innovative training methods to come with a hefty price tag, but the cost of VR equipment is starting to stabilize as more providers enter the market. VR programs are a one-time expense that can prove cost-effective in the long run. Users can take part in as many training modules as required, tracking performance over a range of sessions to give visual and statistical feedback during ongoing assessments. This flexibility and convenience means operators don’t have to spend money on materials and resources used for repeat training and practice. Instead, trainees can engage with lifelike scenarios as often as necessary without additional costs to their employers.

Training in virtual environments reduces the large expenditure associated with real-life simulations. Let’s think, for example, about the resources used in training firefighters or police officers; they have to close roads, involve many people as actors, simulate dangerous scenarios, etc.

VR is still at the very beginning of realizing its substantial potential to save money in the industrial sector. The operation of entire manufacturing plants, including all machines and processes, will be transformed in the coming years.

Looking just at the benefits offered by virtual safety training, the savings arise from a range of sources. When workers are better trained, there are fewer accidents. In addition to fewer injury-related costs and production delays, a better safety record translates into less risk and lower insurance costs. As long ago as 2007, VR was being proposed as a cost-saving, on-demand resource for workers. Though very conceptual, that 2007 paper likely helped set the stage for the many innovations making headlines today. VR can help overcome the lack of on-demand access to training because that virtual world can be summoned any time the VR headset is needed. This dedicated resource makes safety knowledge always accessible.

David Wentworth is principal Learning analyst at Brandon Hall Group, an independent research/analyst firm in the Human Capital Management market. The firm’s vision is to inspire a better workplace experience, and its mission is to empower excellence in organizations around the world through its research and tools. Brandon Hall Group has five HCM practices, produces the Brandon Hall Group Excellence Awards and the annual HCM Excellence Conference, held Jan. 30-Feb. 2, 2018, in Palm Beach Gardens, FL. 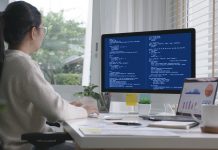 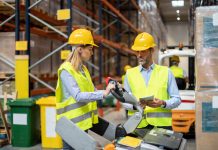