2018 Leadership Development Survey: Are Your Next-Gen Leaders On Track?

This year, the youngest of the Baby Boomer leaders will turn 61, and simple demographics assures that the need to replace the exodus of these aging leaders will accelerate rapidly over the next four to six years.

But are organizations doing enough? Are current leadership development practices setting organizations up for a successful transition?

Studies by McKinsey & Company and J.P. Donlon have found a close correlation between the skills of a company’s leaders and market performance. However, research by Deloitte and the U.S. Federal Reserve show that return on assets (ROA) and productivity growth—both key measures of leadership success—have shown a steady decline since the 1960s. The data does not look good for the strength of our leadership capabilities.

For the second year, Training magazine and Wilson Learning Worldwide teamed up to conduct a survey of more than 500 respondents focused on creating effective leaders and preparing the next generation (see the survey methodology at the end of this article). The results of this survey indicate there is a strong desire and great need to strengthen leadership development efforts. In particular, efforts need to focus on meeting the needs and expectations of the next generation of leaders. This research points to specific actions organizations can take to improve the effectiveness of their leadership development efforts and strengthen their organization’s future.

Based on the survey results from 2018 and 2017, there are some interesting shifts in emphasis.

The skill focus of organizations also shows some interesting changes. Organizations were asked to identify the top five priority skills that are the focus of leadership development efforts. Graph 2 shows the rank order of priority skills for 2018 and the rank order change from 2017. While most of the skill priorities remain roughly the same, there are four notable exceptions. First, Performance Management and Self-Development skills show a marked decrease in priority. Performance Management dropped six slots, from third to ninth, while Self-Development dropped three slots, from 10th to 13th.

Most of the 24 learning methods used for leadership development did not change meaningfully from 2017 to 2018, with four interesting exceptions. As Graph 3 shows, use of simulations and role-plays shows a marked increase of more than 11 percent, with approximately 82 percent of organizations using simulations in 2018, compared to 71 percent in 2017.

What did simulations replace? Results suggest three methods show the greatest decline in usage: Open-Source Programs (down 7 percent), Learning Portals (down 5 percent), and Gamification Methods (down 4 percent). While not dramatic decreases, this suggests a move away from more learner-selected methods and games for motivation toward the more sophisticated application-focused, game-like activities of simulations and role-plays.

One of the most dramatic shifts from 2017 involves who is participating in leadership development programs, as shown in Graph 5. Organizations are directing more of their leadership efforts toward middle managers, supervisors, and high potentials.

Comments indicate organizations are realizing that large numbers of middle managers and supervisors will be retiring soon—and if they don’t begin to prepare the next generation for these roles now, they will have difficulty filling them moving forward.

Graph 6 shows the percentage of companies that indicated effective performance on these outcome measures in both 2017 and 2018. The vast majority of respondents in both years agrees that top management acknowledges leadership is a source of advantage (67 percent), and a small majority agrees it has best-in-class leaders (55 percent). However, for the other outcome indicators, the majority is not so optimistic. Results went down from last year on the critical issues of having sufficient resources and closing leadership gaps.

This combination of insufficient resources and increasing leadership gaps is a dangerous one. With the retirement of the Baby Boom generation, this gap in leadership capability will only grow, and if there are limited resources to prepare the next generation of leaders now, many organizations will be ill prepared for the future.

To determine the actions that more effective organizations are taking to successfully develop the next generation of leaders, we combined (averaged) these five measures into an overall score of leadership development performance. We then divided averages into three groups based upon the scores. 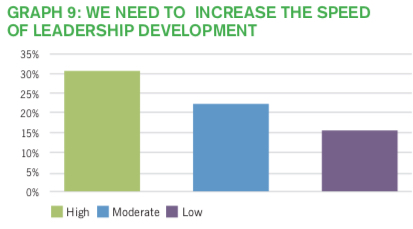 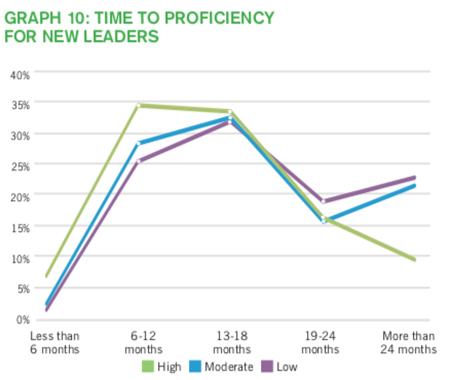 When asked to name their greatest challenge to developing the next generation of leaders, respondents offered a wide range of answers. The most frequent response is a variation of lacking sufficient leadership development resources. For example:

“The speed at which we need to continue to promote and develop new leaders is tremendous. We are ramping up our organization at incredible speed, but developing so many leaders in so little time is challenging.”

Close behind the resource issue is the issue of which developmental model and learning approaches will have the greatest success. Organizations are struggling with leaving behind traditional approaches to developing leaders and adopting approaches more in line with the expectations of younger learners. For example:

“The greatest challenge is the training methodology. The next generation has different expectations and needs. Instructor-led classrooms are not their most popular choice. But developing training on technical platforms—mobile, e-learning, etc.—is not sufficient alone either. We also need active support and participation from high-level leaders to sponsor the programs and current managers to coach and mentor. Learning the skills is not the problem; practice and an understanding of the need for character and competence in leadership development is required—not just creating an app for that.”

A large number of organizations also cite lack of executive support for leadership development, and expectations of rapid advancement from younger leaders as barriers to preparing the next generation. 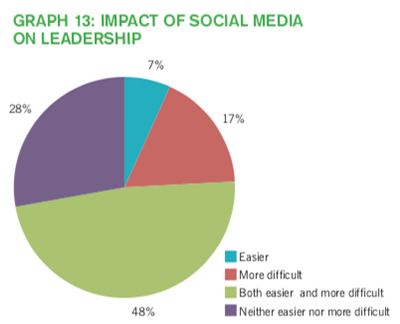 Graph 13 shows the results of the question: Has social media made leading easier or more difficult? The largest group, 48 percent, says it makes leading both easier and more difficult, while 28 percent indicate it has no effect (neither easier nor more difficult). While not surprising, the vast majority, 72 percent, agrees it has a meaningful impact on leadership, for the positive and negative. The results clearly point to a need to understand the role of social media in the organization and in leadership development.

When asked to describe how social media makes leadership easier or more difficult, the responses were overwhelming, with more than 80 percent of survey respondents providing descriptions. This level of participation on an open-ended question is almost unheard of in a survey, indicating that it did, in fact, touch a nerve.

How does social media make leading easier? Responses tended to boil down to two main advantages:

Social media has made it easier to reach more employees and get feedback faster.

So many items coming at you from every direction cause competing priorities; it is harder to disseminate accurate information from the vast pool of “opinions.”

Employees are more likely to post content that is a breach of confidentiality of some kind without realizing the possible impacts and downstream fallout.

The results of this survey suggest several actions organizations can take to strengthen their leadership development efforts when preparing the next generation of leaders. Specifically, the results indicate you can achieve a greater impact on your organization by:

These best practices of leadership development can help you make a greater strategic contribution to your organization’s leadership. As the next generation of leaders begins leading teams, departments, business units, and organizations, it is your responsibility to make sure they are well prepared for these roles. The very future of your organization may depend on it.

The survey responses consisted of a well-balanced representation of professionals and decision-makers within the learning and development industry. The majority of respondents (58 percent) had management responsibility, with the largest groups having the title of manager (24 percent) or director (22 percent).

More than half of the respondents (62 percent) were from companies that only operate in the United States; the remaining were composed of global (22 percent) and multinational (16 percent) companies. Organizations were fairly evenly distributed in company size, ranging from less than 100 employees to more than 50,000, with the largest group (22 percent) having 1,000 to 5,000 employees. Individual organizations spent an average of $1.9 million annually on learning and development—46 percent higher than the $1.3 million spent in 2017.

Michael Leimbach, Ph.D., is a globally recognized expert in instructional design and leadership development. As vice president of Global Research and Development for Wilson Learning Worldwide, he has worked with numerous Global 1000 organizations in Australia, England, Germany, Japan, South Korea, Taiwan, and the United States. Over more than 30 years, Dr. Leimbach has developed Wilson Learning’s diagnostic, learning, and performance improvement capabilities. He is editor-in-chief for the ADHR professional journal, and serves on the ISO Technical Committee (TC232) on Quality Standards for Learning Service Providers. Dr. Leimbach has coauthored six books, published more than 100 professional articles, and is a frequent speaker at national and global conferences.

For more information, contact Wilson Learning at 800.328.7937 or visit WilsonLearning.com.

Cheers to 20 Years!
The Choice Was Yours!
The Alligator Trap
Can Smart Tech Be Too Smart?
Putting People First
Stand for Something!