Teams are the workhorses in today’s organizations. Sometimes a few people sit in the same room and sometimes many are spread around the world. But regardless of their size or location, teams are complex and often encounter problems that prevent them from performing at their best.

It’s easy to blame these problems on interpersonal issues, but, in fact, there are a series of other possible causes. Dick Beckhard, a well-known organizational theorist, developed the GRPI model—Goals, Roles, Processes, Interpersonal Relationships— to help diagnose the causes of team dysfunction. Pronounced “grippee,” the model is depicted as a pyramid. In the version shown below, I’ve adapted it to emphasize the influence the Interpersonal Relationships component has across the other three. It is the lubricant that helps the other components function well, but it’s just one of the four possible causes of team troubles. 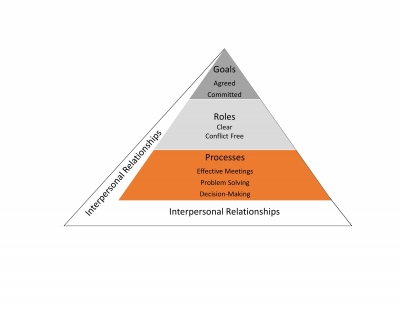 If your team is not functioning well, you can work your way down GRPI to diagnose trouble spots.

Goals: The organizing principle for any team starts with goals. We all have been on teams where goals are ambiguous or team members aren’t committed to them. What are the symptoms? Team members fight, and the discord mistakenly is labeled as an interpersonal issue. But an exploration of the situation often uncovers that the cause of the team’s distress may be a lack of understanding or commitment to the team’s goals.

Roles: If goals aren’t the issue, then move down to the next level in the model and explore the team’s roles. Clear and conflict-free roles enable team members to fulfill their responsibilities. Overlapping responsibilities cause role conflict over “who does what,” which increases levels of stress and poor performance. Or if there are gaps between roles—where one role ends and another begins— important work is left incomplete. The source of the problem often is labeled an interpersonal issue, when, if properly diagnosed, it actually is caused by poorly defined roles.

Processes: Moving down the GRPI pyramid, this level in the model examines how work gets done and how the team makes decisions, allocates resources, communicates, or solves the inevitable problems that arise. If the processes are not understood or are ineffective, then frustrations grow and the team develops the familiar symptoms of interpersonal strife.

Interpersonal Relationships: The last stop on the GRPI diagnostic journey is the one we thought was the problem all along—Interpersonal Relationships. But as we’ve seen, goals, roles, and processes are other likely causes. So now it’s time to attend to relationships. Examine communication styles, trust, and how people relate to each other. Good relationships affect all the other components, helping the team understand and develop consensus about its goals, find ways to clarify its roles, and define the processes so critical to team success.

Like any useful model, the GRPI model has its limitations. The model is static, providing a picture of team performance at a specific point in time, rather than during the span of a team’s life cycle. The model has another limitation: It looks at teams as rational, structured entities, rather than recognizing the shared emotional life teams develop over time. Just keep these limitations in mind as you use the model to transform teams.

Ross Tartell, Ph.D., is currently adjunct associate professor of Psychology and Education at Columbia University. Dr. Tartell also consults in the areas of learning and development, talent planning, and organization development. He received his M.B.A. in Management and his Ph.D. in Social Psychology from Columbia University. He formerly served as Technical Training and Communications Manager – North America at GE Capital Real Estate.