New research conducted by Training magazine and The Ken Blanchard Companies finds significant differences between the amount of support high-performing teams receive and the support average teams receive— at both an individual leader and organizational level.
Posted: July 19, 2017
Article Author:
By Jim Diehl, Research Analyst, and David Witt, Program Director and Researcher for the Office of the Future, The Ken Blanchard Companies

The nature of teamwork in today’s organizations is evolving. New research conducted by Training magazine and The Ken Blanchard Companies polled 1,300 employees and managers and found that while people spend more than half of their time working in teams, significant gaps exist between what people want and what they are experiencing in terms of clarity, accountability, and leadership practices.

The survey found significant gaps between the amount of support high-performing teams receive and the support average teams receive—at both an individual leader and organizational level. With today’s accelerated pace, teams don’t have as much time to form, experiment, and organically develop along the way. This leaves an opportunity for Training and Development professionals to review the state of teams in their organizations and take steps to close the gaps.

See Figure 1 for the generational breakdown. 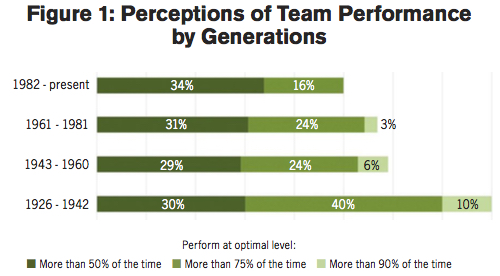 Respondents also were asked to identify what conditions impact the level of effort they put into the teams they work on. Eleven different conditions were listed, and respondents were asked the extent to which they agreed or disagreed with each statement (see Figure 2).

When asked, “As a member of a team, the amount of effort I contribute to a team depends on…,” the top three statements respondents most agreed with were:

THE IMPORTANCE OF TRAINING

Another section of the survey looked to correlate perceived training and support with team performance. The survey found that the highest-performing teams enjoy greater levels of support in general, as well as higher levels of training for both team members and team leaders.

For example, when asked to what degree their organization supported teams to help them be more effective, 62 percent of people in organizations with high-performing teams agreed or strongly agreed that their organization provides a lot of support—a full 33 points higher than the overall average of 29 percent. 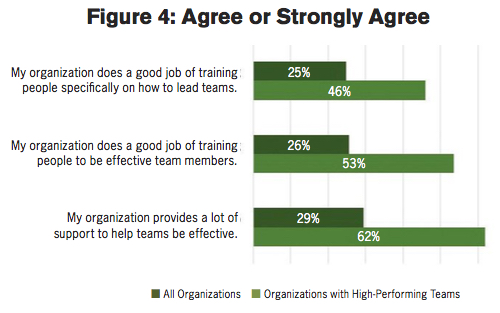 For organizations looking to improve team training to meet increasing needs, Dr. Eunice Parisi-Carew, founding partner and researcher with The Ken Blanchard Companies, recommends leaders begin with a seven-point checklist to identify areas where teams might not be performing at optimal levels.

“In the absence of data, there is a tendency for leaders to overestimate the effectiveness of their teams,” says Parisi-Carew. “So it’s important for senior leaders to first get an accurate picture of what is happening in their organizations. For example, the Blanchard/Training magazine survey identified a 15 percent gap in the way executive-level leaders and individual contributors see team performance levels. For executive leaders, 35 percent say high performance is more frequent, while only 20 percent of individual contributors see the same frequency of high performance.

1. Purpose and values. Does the team share a strong sense of purpose and a common set of values? Does the team have an agreed-upon compelling vision? “All good team performance starts with clear goals,” explains Parisi-Carew.

2. Empowerment. Do team members have authority to act and make decisions? Does the team have clear guidelines about what is and isn’t out of bounds?

3. Relationships and communication. Is the team committed to open communication? Do people feel they can take risks and share their thoughts, opinions, and feelings without fear? “It is critical that team members communicate openly and honestly and demonstrate respect for others,” shares Parisi-Carew.

4. Flexibility. Do team members feel a shared responsibility for team performance, development, and leadership? How does the team adapt to changing conditions?

5. Optimal productivity. Is the team committed to high standards and quality? Do team members hold each other accountable and strive for continual improvement?

6. Recognition and appreciation. Do team members provide each other with positive feedback and recognition? “Recognition reinforces behavior, builds esteem, and enhances a feeling of value and accomplishment,” says Parisi-Carew.

7. Morale. Are team members enthusiastic about their work? Are they proud of their results and of belonging to the team?

For organizations ready to begin improving their teams, Parisi-Carew suggests Training and Development professionals be proactive and model an inclusive learning attitude. “Involve others in crafting a clear purpose, as well as values and goals for your teams. Have leaders follow through by reinforcing what was agreed upon, demonstrating supportive behaviors, and walking the talk,” she explains.

“Talk openly,” she adds. “Create an environment of safety and trust where people are comfortable speaking out about improving team performance without worrying about upsetting the status quo.

“Take action. Some leaders need to learn how to let go. Don’t wait for someone else to decide it’s time to collaborate— everyone is responsible for creating a collaborative environment.”

When people are busy, it’s normal to want to focus on getting individual work done. To combat this urge, Parisi-Carew reminds us of an old adage: “If you want to go quickly, go alone. If you want to go far, go together.” Knowing the characteristics and needs of a high-performing team is critical. The results of the Training magazine/ Blanchard survey provide a snapshot into today’s teams. The survey results give Training and Development professionals a target to shoot for and recommended first steps as they look to create or enhance team training programs in their organizations. Consider how these results and findings can help begin a dialogue about team performance in your organization.

Jim Diehl is a research analyst for The Ken Blanchard Companies and a core member of Blanchard’s research and development team.

David Witt is a program director and researcher for the Office of the Future, The Ken Blanchard Companies’ think tank and research and development division.