On January 15, 2009, Captain Chesley “Sully” Sullenberger found himself in an alarmingly complex situation that no commercial airline pilot had experienced before: He was sitting at the helm of a completely disabled Airbus 320 aircraft a mere 3,200 feet above one of the most densely populated places on the planet.

In that same instant, Sully had a flash of insight that helped him achieve the “Miracle on the Hudson,” saving the lives of all 155 people on board US Airways Flight 1549. Sully’s moment of clarity was the realization that he was no longer flying a powered commercial aircraft: Instead, he was piloting a 70-ton glider.

Drawing upon his Air Force experience flying gliders, Sully lowered the nose of the A320 to change its pitch to maintain optimal glide speed. This maneuver allowed him to create maximum forward motion as the aircraft’s wings sliced through the air, generating lift and buying him the precious seconds he needed to clear the George Washington bridge by less than 900 feet and successfully ditch in the Hudson River.

Insights like Sully’s are instances of clarity that emerge serendipitously from a seemingly endless cacophony of complexity. They lead to a discovery that momentarily clarifies the complex by revealing something that previously went unnoticed or by recognizing something familiar from a different perspective. This revelation or recognition, in turn, leads to an unanticipated course of action that can yield a positive outcome.

Today, many organizations find themselves confronting alarming situations like the one Sully faced. In a world where disruptive technologies disrupt existing industries in the blink of an eye and competitive shifts can render advantage obsolete, companies find themselves drowning in an ever-increasing deluge of data, seemingly devoid of wisdom on how to take decisive action because, unlike Sully, they have not learned how to operate at the Insight level of the Wisdom Hierarchy (see graphic below). 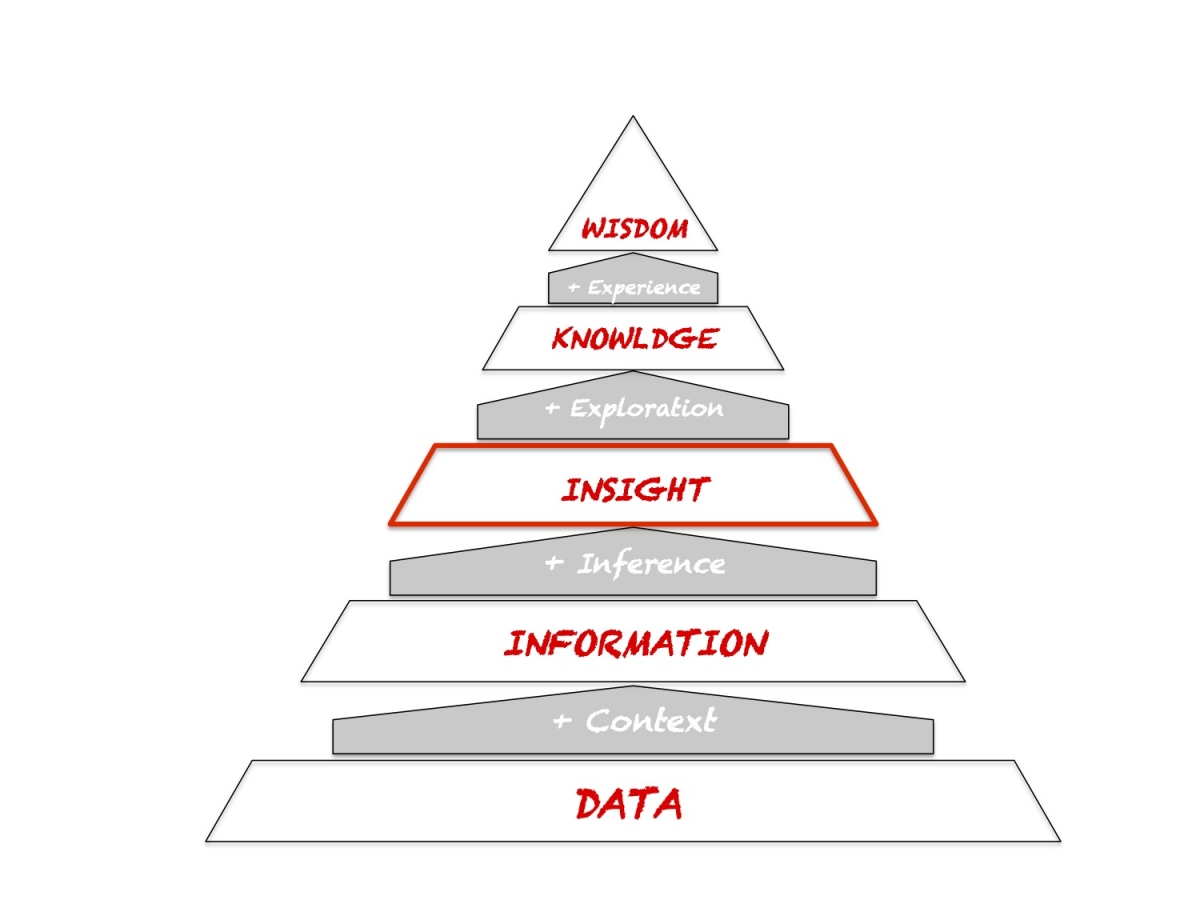 At the bottom of this hierarchy lies an ever-expanding amount of observable data. This vast expanse of data is virtually meaningless until it is put into a specific context that allows people to make sense of it. A spreadsheet with no column or row headers is nearly impossible to interpret. Once the data is rendered in a specific context, it becomes “information.” Importantly, the inferences one individual draws from the same set of information can vary significantly from another’s based on their unique knowledge and experience.

The variety of insights generated by individuals drawing different inferences from a given set of information represent the secret to survival for the enterprise. It is only by collaborative engagement and agency around shared insights that organizations can see and seize opportunities for survival and growth in increasingly complex and connected business contexts. The higher you migrate up the pyramid, the more focused and wise your decision-making becomes and the more your attention can be focused on a smaller set of more important things.

Unfortunately, as the tyranny of urgency takes hold, those charged with making critical business decisions often plunge back down into the information and data layers of the hierarchy to find evidence to advocate for their own perspective. That breaks the creative tension of multiple different perspectives too soon.

So the next time you find yourself faced with an alarmingly complex situation, channel your inner Sully and try to hold the tensions of diverse perspectives on your team long enough for a breakthrough insight to emerge. Doing so might just lead to your very own miracle!

Tony O’Driscoll is a professor at Duke University’s Fuqua School of Business and a research fellow at Duke Corporate Education. He studies how organizations build the leadership system capabilities required to survive and thrive in an increasingly complex world.