COVID-19 has pushed humanity into the liminal space between “what was” and “what will be,” where these successive derivative rates of change have had a profound impact on our collective psyche as a species. Like soldiers in the chaos of a battlefield, we find ourselves lost in a mental fog—no longer clear on what we should believe or how we should behave.

In times of profound societal confusion and delusion, leadership has always emerged to light the transformational path toward a better and brighter future. On March 12, 1930, Mahatma Gandhi took the first step in a 240-mile Salt March that ultimately freed his country from British Rule. On December 1, 1955, Rosa Parks refused to give up her seat to a white man on a bus in Montgomery, AL, sparking the Civil Rights movement in the United States. On January 21, 1961, John F. Kennedy inspired a nation and sent a message of peace to the world when he declared, “My fellow citizens of the world: Ask not what America will do for you, but what together what we can do for the freedom of man.”

EMPHASIZING THE EMOTIONAL SIDE OF CHANGE

Transformative leaders such as Gandhi, Parks, and Kennedy understood that people do not resist change, they resist being changed. They learned that successful transformation requires an empathetic, people-centered approach to change that nurtures a culture of aspiration, alignment, autonomy, and accountability. They realized that most transformative efforts fail because leadership overemphasizes the tangible side of change and underemphasizes the emotional one. After all, on August 18, 1963, on the steps of the Lincoln Memorial, Martin Luther King Jr. did not say, “I have a plan.” Instead, he shared a dream that transformed a nation. 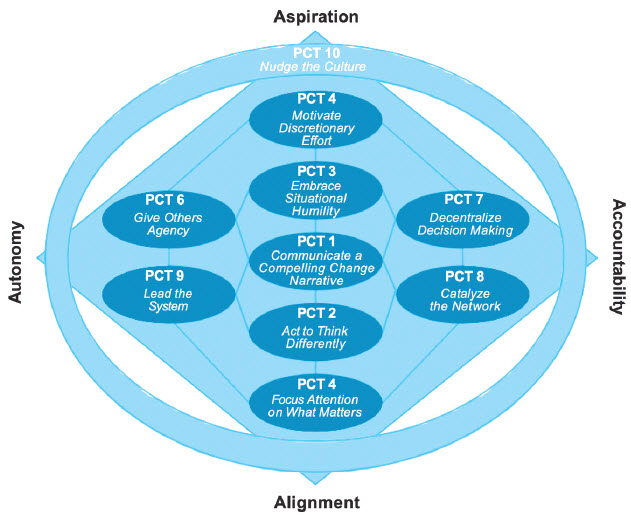 As a leader, are you willing to change your own beliefs and behaviors to cultivate a culture that enables your organization to reach its highest aspiration?

Take the first step on your PCT journey now. Spend five minutes to check your PCT Pulse (download the checklist at: https://trainingmag.com/wp/wp-content/uploads/2022/01/PCT-PULSE.jpeg). Identify the PCT elements that require your attention. Then determine what you must do more, better, and differently as a leader to activate each element. Repeat this process until all 10 elements have been activated.

I wish you “Happy Trails” on your PCT journey!