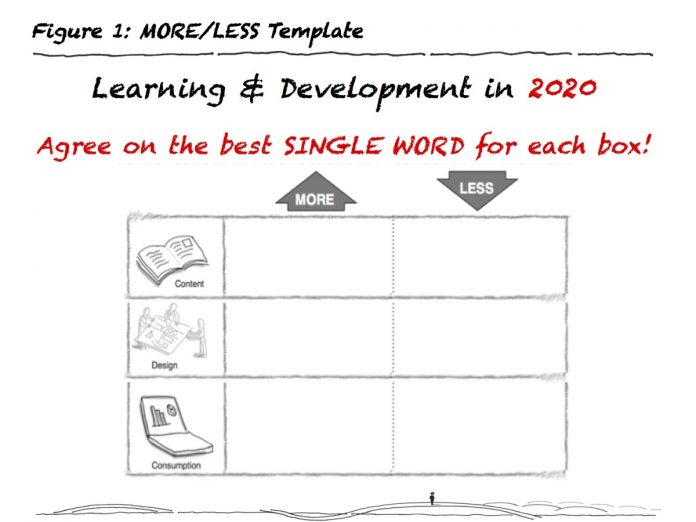 Abraham Lincoln, Peter Drucker, and Alan Kay each is credited with the quote, “The best way to predict the future is to create it.” No matter who originated the quote, we put this idea into practice at Training’s Online Learning (OLL) Conference in New Orleans last fall.

As we endeavored to reimagine the concept of a keynote session for OLC, we set ourselves the following design challenge: How might we tap into the 40 million hours of collective wisdom of the 500 Learning and Development professionals in attendance to co-create a transformative vision for learning?

The result was a shared sense-making session where, instead of hosting a traditional panel with learning visionaries preaching from the pulpit, we leveraged a collaborative technology called UMU to engage each person in the room around his or her personal vision of the future of learning and aggregated those discrete perspectives into a collective transformative vision for learning.

Framing and Bounding the Challenge

Following the design thinking process, we began by framing the problem and defining a spectrum of possible futures to bound the problem space. We started off by settling on a time horizon for the future of learning. This chronological line in the sand had to be far enough away that the next waves of technologies such as virtual/augmented reality, machine learning, and artificial intelligence (AI) would have washed over us, but not so far out in time that we would have no faith in our predictions on how they would impact learning. We settled on the year 2020.

Next, we engaged two learning visionaries to spend three minutes each describing the opposite poles of a possibility spectrum for the future of learning in 2020.

First, Anders Gronstedt, president of Gronstedt Group, painted a learning future picture of rich immersive virtual interaction enabled by virtual and augmented reality applications on the next generation of smart devices. In Anders’ version of the future, real and virtual space are mixed and mingled according to the need at hand. For example, manufacturing workers (who were not replaced by robots) could be shown 3-D graphical renderings of machinery or best practices to improve their performance in real time. In another use case, experts from different parts of the world could convene virtually to share their insights as they collectively solved a complex challenge such as protein folding. In this future, the screen becomes a portal into a contextually sensitive shared virtual environment that enables and enhances both performance support and collaborative problem solving.

Next, David Metcalf, director of the Mixed Emerging Technology Integration Lab at the University of Central Florida’s Institute for Simulation & Training, framed the other end of the possibility spectrum, where the power of low-fidelity but ubiquitous applications such as messaging and voice-based interfaces enable real-time learning that is user centered, personalized, and simple. For example, residents evacuating from an approaching hurricane or spreading forest fire need clear and contextual instructions on the safest path forward delivered on a platform they already use. In David’s version of the future, the power of new technologies such as AI and machine learning is leveraged on the back end of the two interfaces we humans are most familiar with—voice and text—to enable them to learn in real time within the flow of their current experience on interfaces they use now.

The purpose of this exercise was not to argue which version of the learning future is correct. Instead, the goal of these brief presentations was to set up the polarities of possibility for the future of learning that these emerging technologies might create to help frame the problem space for learning in 2020.

What Goes Up and What Goes Down?

Having established the timeframe and the poles of the technology possibility spectrum, we engaged participants around what they would see more or less of between now and 2020 from a content, design, and consumption perspective.

Participants were seated in tables of six to eight people and provided with a “More-Less” template to facilitate data gathering, insight sharing, and prioritization (see Figure 1). 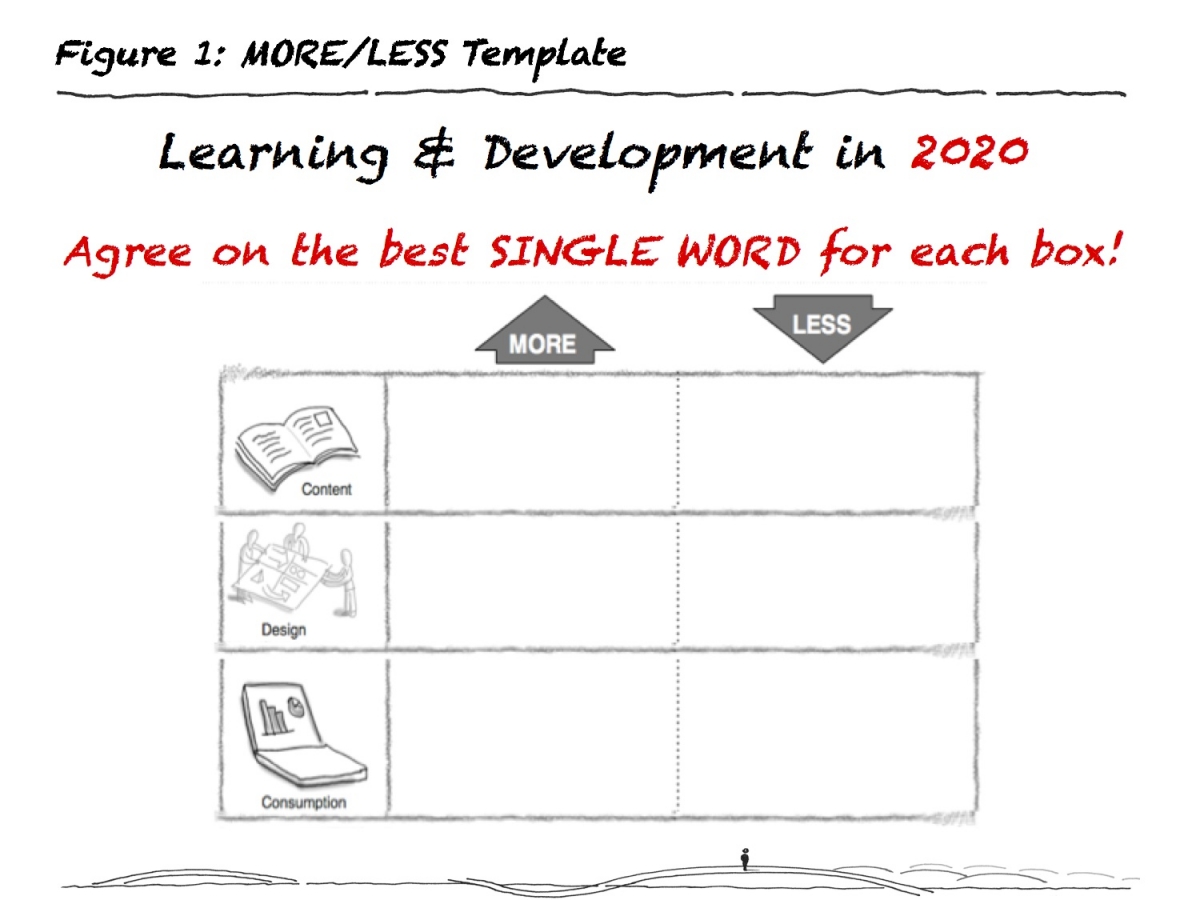 We then moved through a six-step collaborative sense-making process, where:

The first dynamic word cloud revealed that learning in 2020 will be less classroom based, static, scheduled, structured, linear, and planned (see Figure 2). 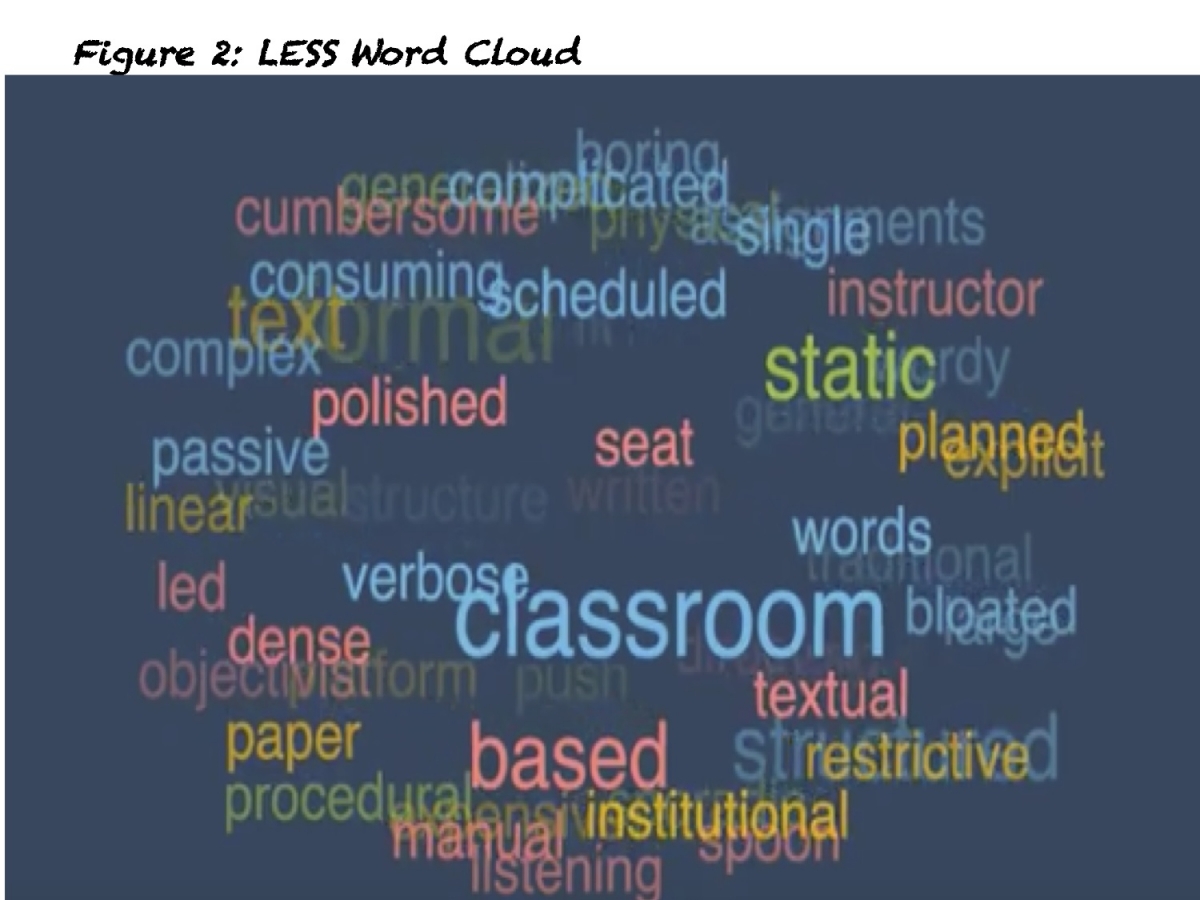 The second word cloud revealed that learning in 2020 will be more digital, adaptive, on-demand, personalized, interactive, and instant (see Figure 3). 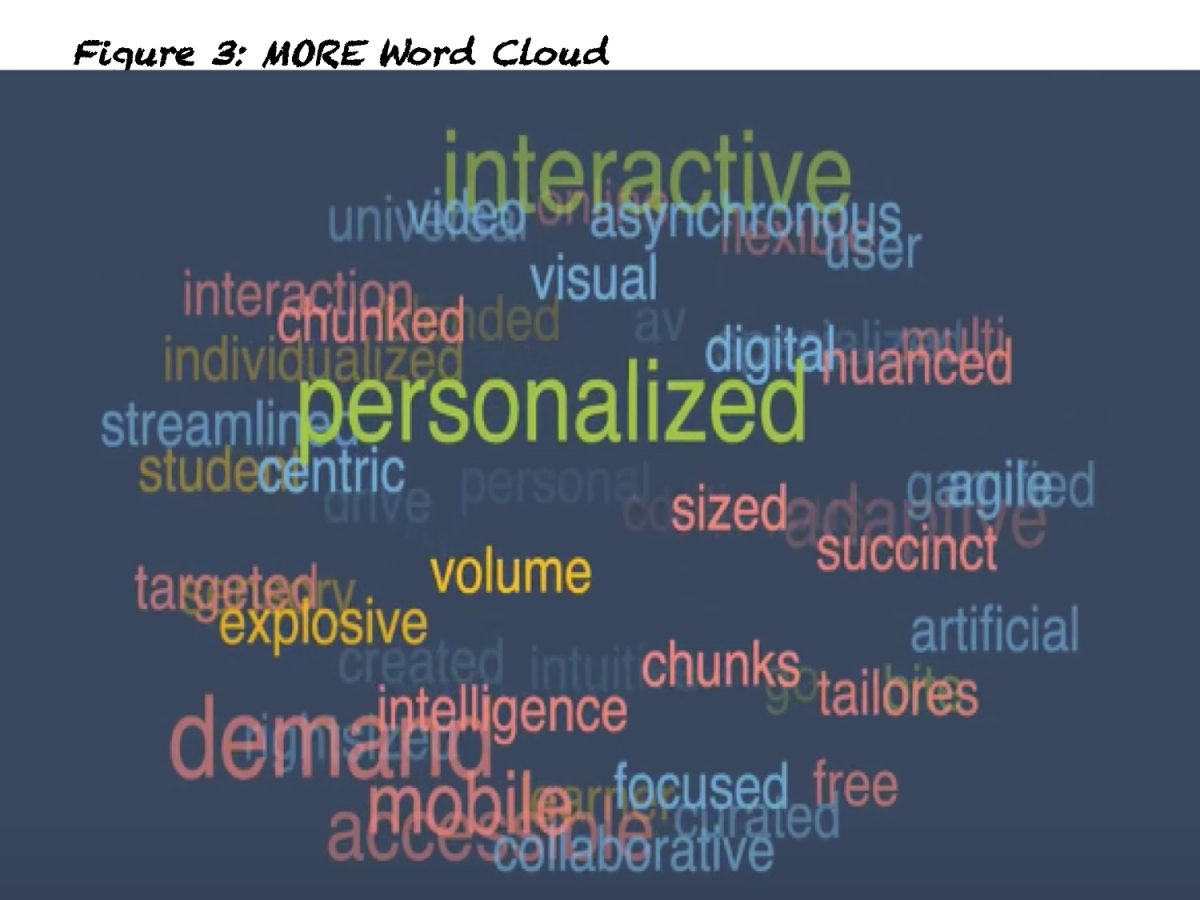 Working at the same tables, participants moved through a five-step collaborative process to identify the Top 10 learning shifts:

As the software crunched the numbers to reveal the Top 10 shifts in learning between now and 2020, you could have heard a pin drop in the room. In less than one hour, we had managed to integrate human and machine capabilities to create a transformative vision for learning. What would this collective sense-making process reveal?

Suddenly the screen came to life and the wisdom of the crowd around the Top 10 shifts was revealed to all (see Figure 4): 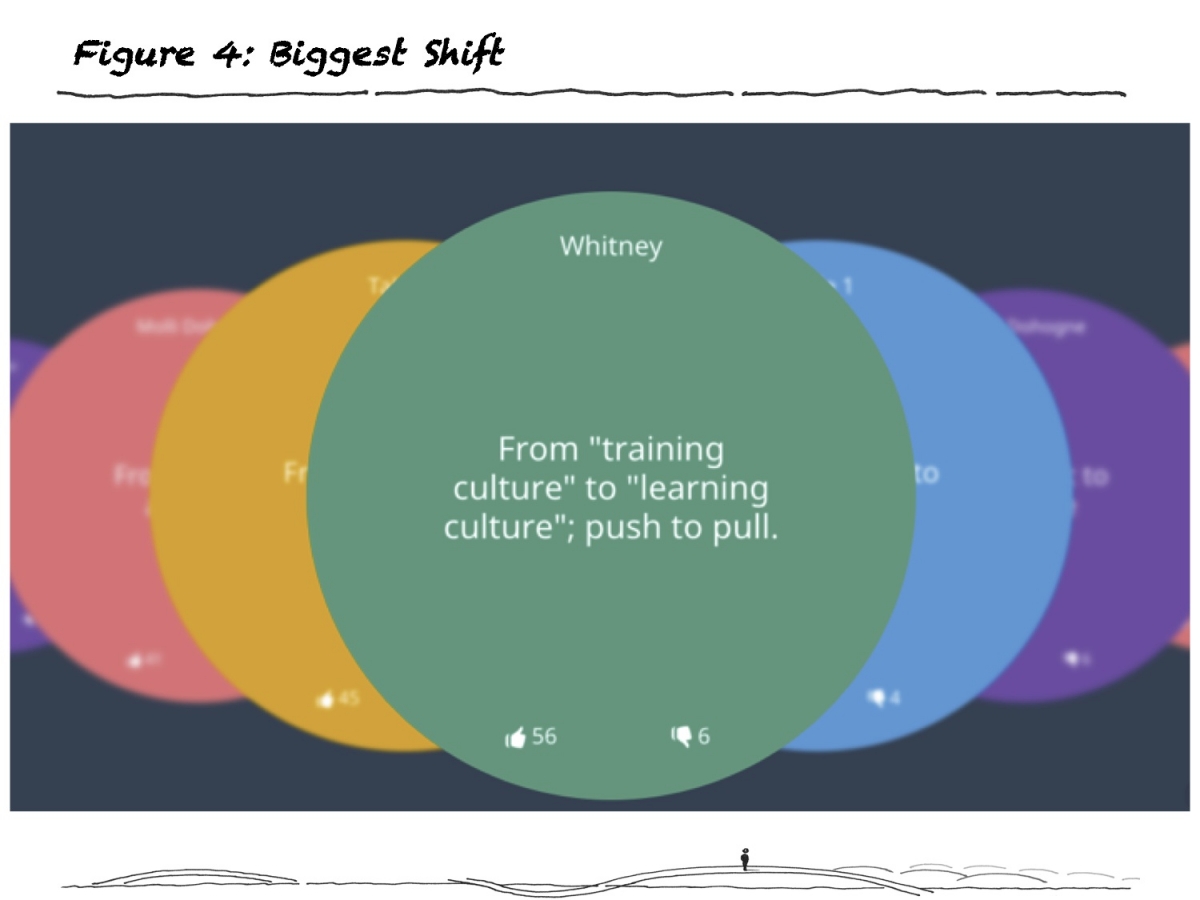 Riding the Waves of Change

Even a cursory review of these Top 10 shifts reveals that learning will experience a profound change over the next few years. Our choice as Learning professionals at this pivotal moment in time is to decide whether we will co-create the future of learning by riding the transformational waves of change we have anticipated with these shifts or become crushed by them.

I’ve already curated a YouTube playlist to learn how to surf these waves of change. Are you on board with me?

Authors’ Note: I would like to thank Anders Gronstedt and David Metcalf for trying something new at this year’s OLC keynote. Without their willingness to give up airtime on the stage and engage in this sense-making process, we never would have achieved this outcome.

Tony O’Driscoll is global head of DukeCE Labs, whose purpose is to discover what’s next for leadership development by experimenting with new methodologies, approaches, and technologies to uncover where leverage lies in building the leadership system capabilities required to survive and thrive in an increasingly complex world.